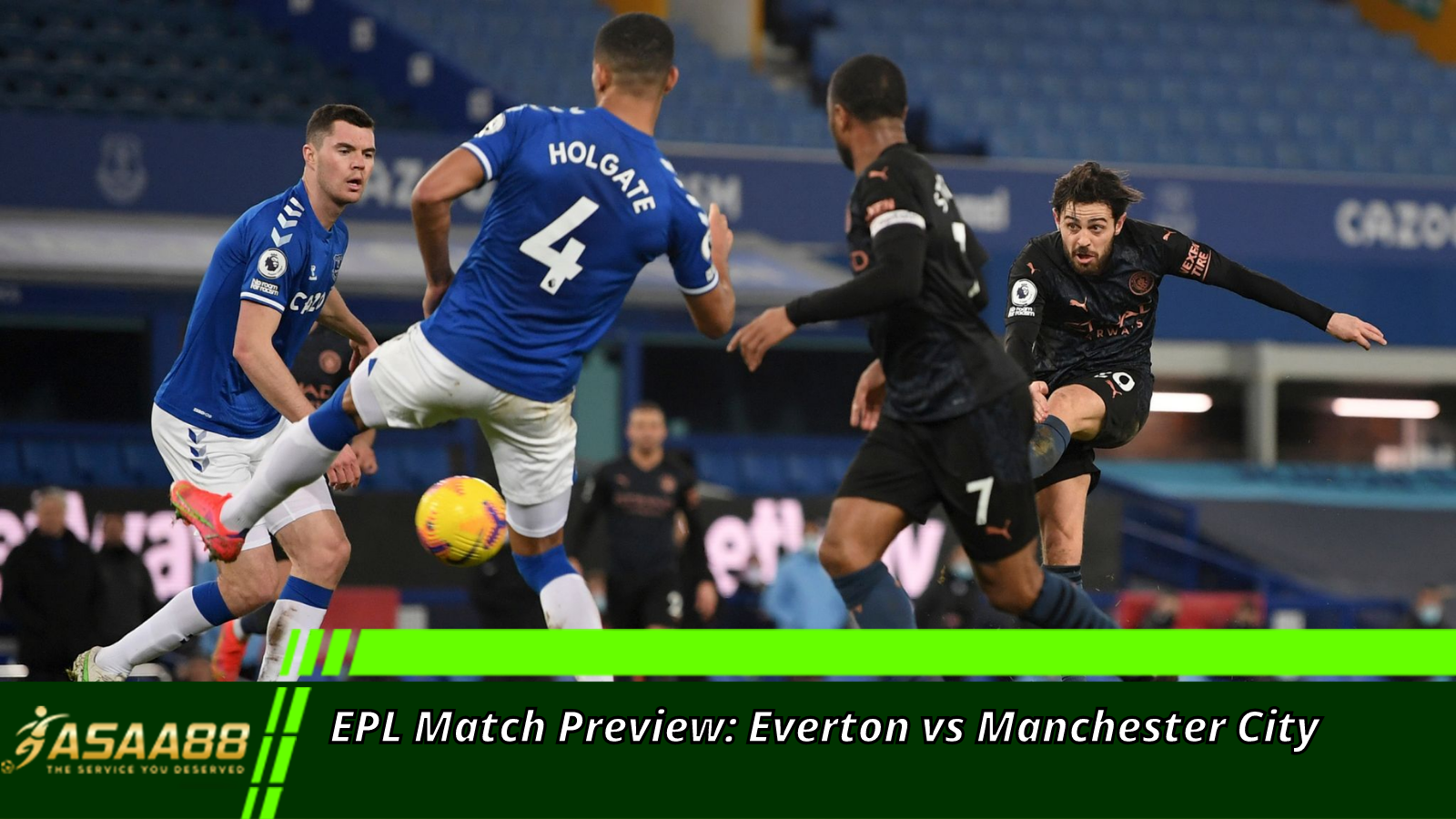 Manchester City’s unbeaten run came to a rather surprising end after they were stunned 2-3 by Tottenham at the Etihad Stadium, and now will seek to get back to winning ways as they travel to Goodison park this Sunday.

The Toffees, meanwhile, are also hoping to bounce back with a victory and could move five points clear of the relegation zone if they were to cause an upset against the Citizens.

After securing a comfortable 3-0 victory at home against Leeds United, recording 10 shots on target, Everton suffered a disappointing 2-0 defeat away at Southampton last weekend, in a game in which they failed to register a single shot on target.

Frank Lampard – who made 38 appearances for Man City between 2014 and 2015 – has had a mixed start to life as Everton manager, winning both games at Goodison Park but losing both away matches, and following Burnley’s surprise win against Tottenham Hotspur in midweek, he now sees his team sitting just two points above the relegation zone.

Everton face an uphill task on Saturday against a Man City outfit who they have beaten only once in their last 17 Premier League meetings, including defeat in each of their last eight in succession; only against Portsmouth (13) between 1948 and 1956 and Manchester United (nine) between 1999 and 2004 have the Toffees lost more consecutive league games in their history.

With an FA Cup fifth-round tie against Boreham Wood and then four successive league fixtures against Spurs, Wolverhampton Wanderers, Newcastle United and Watford soon to come, Everton will need to find their form quickly if they are to resurrect what they can from a disappointing season, though success on Saturday is unlikely.

While Spurs supporters and football neutrals will have been enthralled by last weekend’s five-goal thriller at the Etihad Stadium, Man City fans were tearing their hair out after witnessing Harry Kane produce a magnificent performance against the team who were so desperate to sign him last summer.

A stoppage-time penalty kick converted by Riyad Mahrez appeared to have rescued a point for the Citizens, but Kane managed to head home a dramatic 95th-minute winner to secure all three points for the visitors and end City’s 15-game unbeaten league run.

Pep Guardiola has insisted all season that the title race is not over yet and now the battle for this year’s Premier League crown is the tightest it has been for months, with Liverpool now nipping at City heels in second place, sitting only three points behind the summit following their emphatic 6-0 win over Leeds in midweek.

Since suffering a heavy 4-0 loss in his first ever trip to Goodison Park, Guardiola has seen his City side win each of their last five away games against Everton in all competitions. The Citizens currently boast a 12-game unbeaten league run on the road, winning 10 times and drawing twice since their opening-day defeat at Spurs, and have only conceded eight goals during this period.

City will be confident of bouncing back with a victory on Saturday, as they aim to head into three successive fixtures in three different competitions – against Peterborough United (FA Cup), Manchester United (Premier League) and Sporting Lisbon (Champions League) – on a positive note.

Everton duo Demarai Gray and Abdoulaye Doucoure have both taken part in training this week, after recovering from respective hip and groin injuries, but they will be assessed ahead of kickoff to see if they are fit to start.

Lampard will, however, be without Yerry Mina (thigh), Ben Godfrey (hamstring), Fabian Delph (thigh) and Tom Davies (thigh) due to injury.

Despite failing to impress in front of goal last weekend, Richarlison and Dominic Calvert-Lewin are set to retain their places in attack, while Anthony Gordon is expected to start on the left side of midfield, with either Andros Townsend, Alex Iwobi or Anwar El Ghazi to operate on the opposite flank.

January signing Dele Alli is yet to start for the Toffees and the 25-year-old may have to settle for a place on the substitutes’ bench again this weekend, with Donny van de Beek and Allan seemingly preferred in centre-midfield by Lampard at present.

As for Man City, Guardiola has confirmed that Jack Grealish and Gabriel Jesus are both available to play after recovering from respective shin and muscle injuries, while Oleksandr Zinchenko is also in contention to feature despite Russia’s invasion of his native Ukraine.

The Spanish boss is unlikely to make too many changes to his starting lineup; however, if Riyad Mahrez is recalled then Ilkay Gundogan could drop out, which would likely see Bernardo Silva move into the midfield three alongside Rodri and Kevin De Bruyne.

John Stones and Nathan Ake, who were both unused substitutes against Spurs, will be looking to force their way into the first XI, though Ruben Dias and Aymeric Laporte are the most likely duo to begin at centre-back with Kyle Walker and Joao Cancelo to continue as the full-backs.

With Everton struggling tremendously this season, there is little chance of them overcoming their opponents, and the home crowd advantage is likely just to ease the blow.